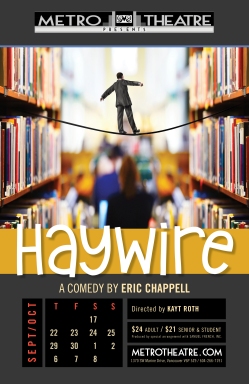 This show marked my directing debut in the city of Vancouver. What made it unique was that, written in 1998 and with no set time period, we turned it into a period piece – unusual since none of us considered the 1990s long enough ago to be a historical period. It was the small things that made it so – mainly things like use of landlines and phone directories, and jobs at the video shop.

Synopsis (from Samuel French):
Alec Firth is having an affair with his assistant, Liz, and has organized his domestic life so that they can go to Spain on holiday without making Alec’s wife Maggie remotely suspicious. What could possibly go wrong? Plenty. On the doorstep, in dizzyingly rapid succession, are: Phoebe, Alec’s mother, who has discharged herself from her old people’s home; Alec’s son Jamie, with a broken ankle; and his daughter, heavily pregnant and not planning to marry the child’s father.